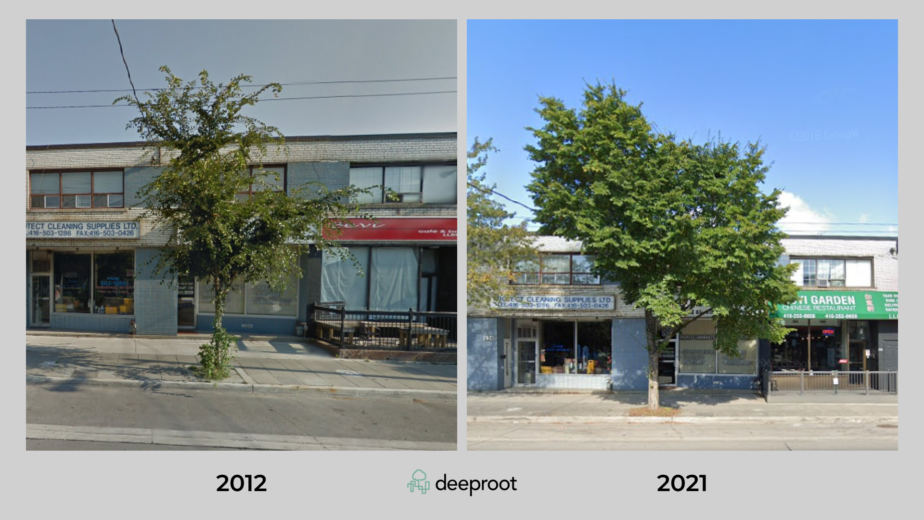 As a major thoroughfare in Toronto, ‘The Queensway’, has experienced a significant transformation over the last 70 years; from streetcars in the 1950s to hybrids and electric vehicles in the 2010’s. For the last decade, the street has also been the setting of a study that demonstrates the success of the Silva Cell as a tree and stormwater system in a municipal streetscape.

The project was initiated as a potential solution to address the disturbance of tree roots due to removal of sidewalks for utility cuts. A working group with participants from various City of Toronto Divisions, including Toronto Water, wanted to utilize the new Silva Cell technology to “test the Silva Cell’s capacity to manage surface runoff” in addition to its capacity to grow large healthy street trees. The project was constructed in October of 2008 and was the “first installation of the Silva Cell system in the world where stormwater was routed into soil cells for the purpose of filtering water and quality control”.

Silva Cell helps to protect soils from compaction, while providing structural support to accommodate the loading requirements of modern transit. Trees need adequate water supply and soil volume for roots to grow to support the mature size of the tree. Benefits of Silva Cell increase over time, trees grow larger, and provide more rainwater interception and evapotranspiration. In the STEP case study the author writes,

“From an economic perspective [street trees] pay for themselves many times over. Urban trees are an important climate change adaptation tool-they help moderate temperatures and reduce the impact of storm events on city infrastructure and the community. Many trees die before they can grow large enough to realize their full potential.” 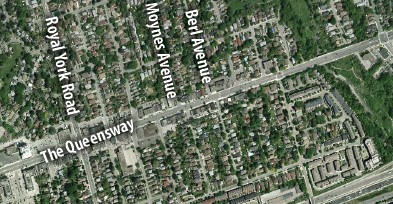 On the north side of the street, in the commercial area, between, two different project sites just 10 meters apart were installed. The two bioretention study sites were a side by side comparison but differed in their design options. Both sites used an American Liberty Elms (Ulmus Americana Libertas) and Freeman Hybrid Maples (Acer x fremanii). “The east bioretention treats and infiltrates stormwater from the adjacent road, while the west site only receives water from the opening at the surface around the tree trunk. In essence the sites are comparing strategies on tree health and quantifying stormwater management of treating and infiltrating water versus an opening with no treatment. Note the Silva Cells and the soil in this study and in design are separated from surrounding soil, creating a control.

The two sites were installed without disturbing existing utilities. As 50% of Toronto’s annual precipitation events are less than .19” (5mm), the Silva Cell system was sized and laid out to manage the runoff from a 2” (50mm), 24-hour rain event. Water is captured from the crown of the street to the building’s face and from one end of the block to the other. There are 16 cubic meters (600 cubic feet) of soil per tree. An 8” (20 cm) PVC pipe runs from the street catch basin into the top layer of the Silva Cell system, delivering all of the surface runoff from the roadway and adjacent sidewalk into the bioretention soil. A perforated PVC pipe then distributes the surface runoff evenly throughout the soil and the water infiltrates until it reaches the bottom of the system. At the bottom is a perforated drain line carries any excess overflow into the existing stormwater system.

The project took three days to complete construction, using a crew of five. An impermeable membrane was installed in order to facilitate monitoring – an element that would not normally be included in a system of this kind. The City with assistance from Ryerson University installed monitoring equipment to track the volume of infiltration and quality of water in and out of the Silva Cells. According to an interim results report in 2014, both sets of trees were irrigated with stormwater runoff for four years.

Monitoring results showed reduced TSS and heavy metals from the road run off that entered the system. The TSS removal rate exceeded the 80% TSS reduction that most regulators require and was close to 90%. Additionally, there was no runoff from the site after a rainfall of 3mm following periods of no rain, meaning the system captured all the stormwater on the site. Post-construction monitoring can aid in evaluating when technologies are effective and where they can provide recommendations.