On a warm, 80F degree summer day in June, 2019 Davis, California residents woke up to a safe, pedestrian and biker friendly streetscape on the intersections of Third St and A St, in the heart of downtown Davis. 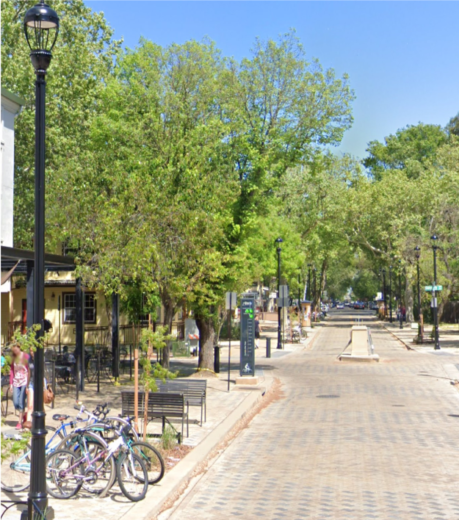 Google Maps Street View of Third and A St. Taken before the Bicycle Part Art Piece was erected. Red Oak and Autumn Purple Ash featured along the streetscape.

Just 15 miles west of Sacramento and home to a large University of California Campus, there is a strong sense of community, place, and sustainable design on Third St. The positive vibrations seen and felt above ground trickled their way to the Sacramento Chapter of American Public Works Association (APWA). The association took note of the public space streetscape infrastructure improvements and awarded the Third Street Gateway Project, Project of the Year (Transportation-Streetscape Category). The finished gateway now lined with a bicycle traverse counter, a central art piece that is made of bicycle parts, and new street lights. These are just a few reasons the project was granted an award that “demonstrates excellent management, administration, design, sustainability, and construction-community relations”, Davis Vanguard. 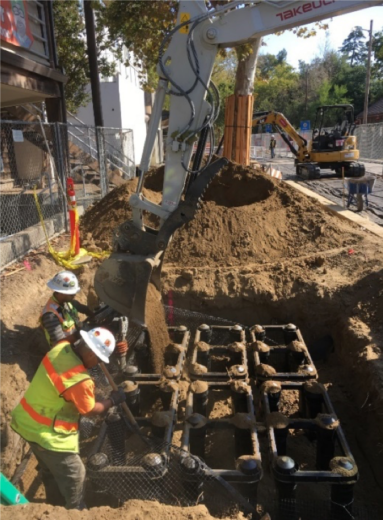 The improvements tackled by project managers, design teams, and engineers extend beyond the art and utilities. Green infrastructure including trees and our Silva Cell were a vital part of the sustainable recognition portion of the award. Working closely with the contractor, Teichert Construction, Red Oak (Quercus Coccinea) were installed on Third St while Autumn Purple Ash (Fraxinus Americana) were chosen for University Street for a combined total of 23 trees. Healthy trees above ground as well as proper stormwater management below ground was a shared desire between DeepRoot® and project designers, RHAA. The Red Oak and Autumn Purple Ash have access to 138 3X Silva Cells roughly equivalent to 5,421 cubic feet of soil volume as a result of the Silva Cell system. John Martin, a Senior Associate at RHAA had this to say about Silva Cells as part of the project six months after the projects opening;

“Large, healthy street trees play a prominent role in the appeal and visual character of the City of Davis. Silva Cells were a smart decision and desired from the project’s outset to help enhance the City’s urban forest on a prominent downtown street. They provided a flexible system that allowed us to reconfigure their layout and navigate existing utilities; they expanded the availability of uncompacted soil volume for trees; and they supported a permeable paver system installed above them.”

The Davis Third Street Gateway Project is a true embodiment of resilience and sustainability. The project is reducing local flooding via pervious pavement, increasing Davis’ canopy cover, mitigating heat island effect for those common high 80s- and 90s-degree days, and encourages non-vehicular modes of transportation through the urban space.

Cheers to the project teams and a big thanks to all who helped contribute to this well-deserved win!

See more on this project at RHAA’s project site.