– A permanent public space reclaimed for the community of Washington Heights elevates large city space transformation via incorporating green infrastructure
– 14 trees create an inviting ambiance for people at the lively market, establishing a hierarchy of trees and people over cars and streets.
– The trees have grown substantially in the past several years, adding to Manhattan’s tree canopy, mitigating heat island effect, and providing cooler temperatures during Manhattan’s hot summer days.

In the heart of Washington Heights, Plaza de Las Americas is a 14,000-foot multi-use outdoor space off of 175th Street in New York City. Adjacent stands a magnificent theater called the United Palace, dating from 1930, and designated a NYC Landmark 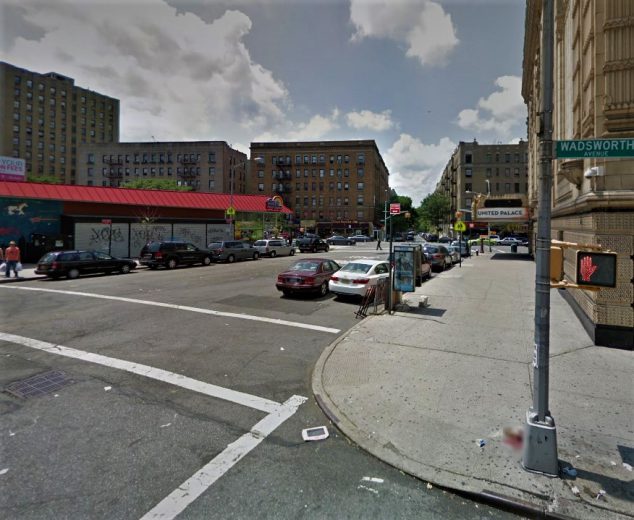 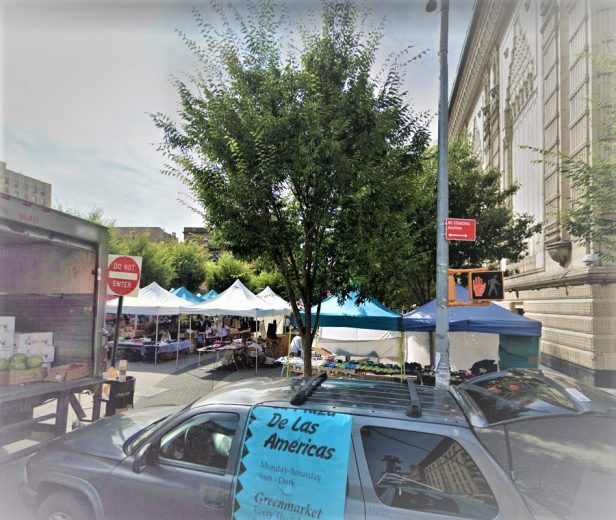 Lin-Manuel Miranda mined memories of growing up in the neighborhood when he wrote the music and lyrics for the Tony Award–winning Broadway hit In the Heights. The film version of the musical will have its world premiere at the United Palace in June 2021 as part of the Tribeca Film Festival.

Miranda is also known for his masterful adaption of Ron Chernow’s biography of Alexander Hamilton into the famous groundbreaking musical Hamilton.

Since 1980 the plaza space had been used as a farmers’ market, and in the mid-1990s it began hosting all types of vendors, everything from mini-clothing shops, to booths where shoppers can pick up toys and musical instruments, as well as stands offering ready-to-eat food. Sandwiched between a fire station, a supermarket, and the historic theater between Wadsworth and Broadway, the plaza was thriving, city managed, and an important source of goods and fresh produce for area residents. The problem? By the early 2000s the space was devoid of greenery and shaded areas and was not ideal for pedestrian access. The space was dedicated to cars and parking spaces, and most importantly allowed emergency fire trucks crossing the space to get to the main avenues The plaza vendors worked on sidewalks, the street, and parking spots to create a market. The space was never truly outfitted to accommodate people.

In 2008, the space was selected for renovation as part of the OneNYC Plaza Equity Program, which comprises over 30 plazas in NYC. Plaza de Las Americas is administered by Washington Heights & Inwood Local Development Corp. (WHIDC).

According to Streetsblog NYC and DOT Vision Zero data, between 2009 and 2015, four motor vehicle occupants, five pedestrians, and one cyclist were injured at Broadway and 175th. After 2015 when the transformation was completed, the city and The RBA Group’s vision of space for people (instead of a space for cars and transit) came true. The new Plaza De Las Americas added benches, electricity and water accessibility for vendors, a public restroom, and 14 Zelkovas, trees with smooth reddish-brown bark in the elm family. Below the trees on the ground level, the paving materials and patterns aim to evoke the plazas of Latin America and the Caribbean. Below ground, more than 400 Silva Cells support healthy volumes of soil for the space and trees in the space to thrive for generations. The project was designed for the city by NV5, a landscape architecture, and engineering consulting firm 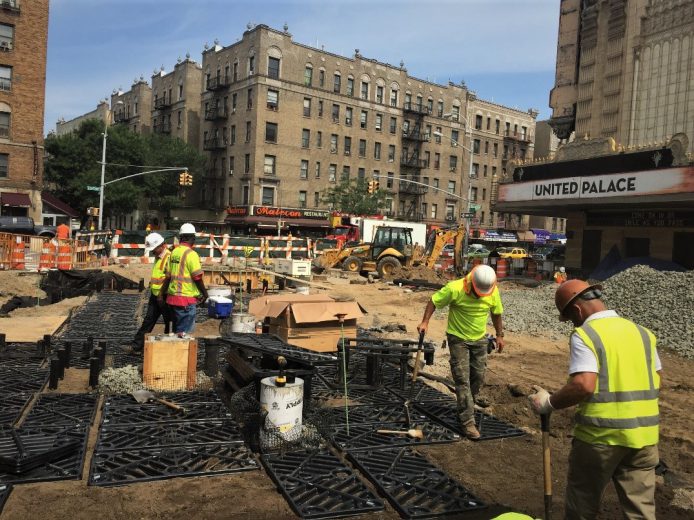 The year-round Plaza de Las Americas incorporates everything that makes a neighborhood stronger, more resilient, and able to grow sustainably. The plaza serves as a micro-business “incubator” for 20–50 individuals. The plaza is at the heart of what it means to be a New Yorker: shop local, eat fresh produce market, support your neighbors, and create community. 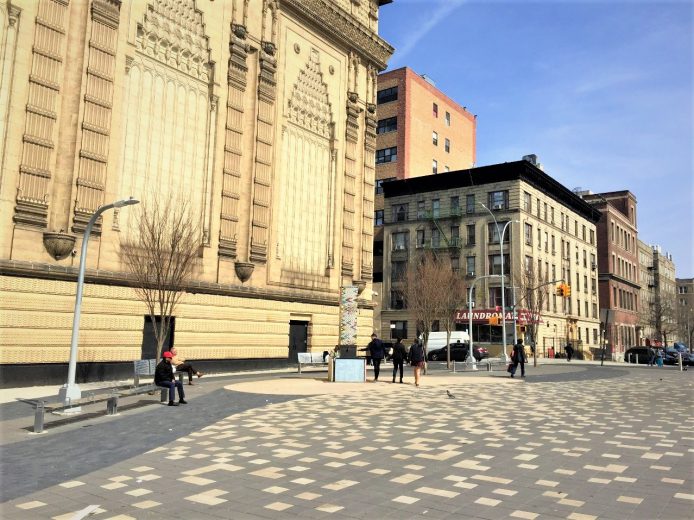 La Plaza de Las Americas in 2016 after installation and construction was complete. 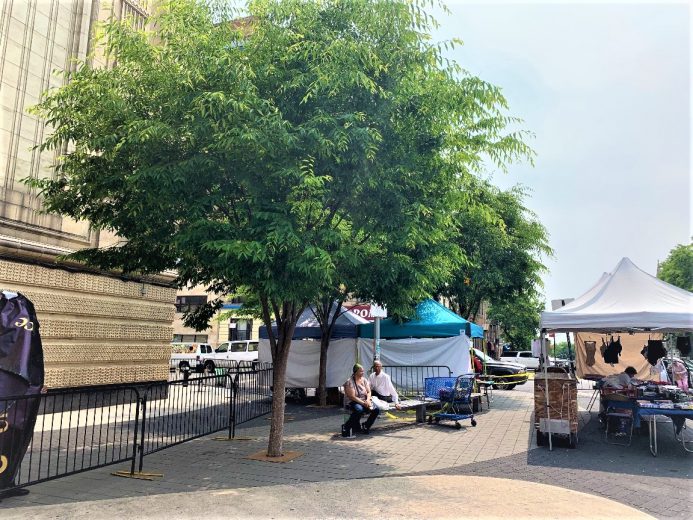 “Plaza De Las Americas was a social justice project. It created a hardscape plaza for community activities and events but where George Washington Bridge–related traffic congestion contributed to poor air quality and high asthma rates. It was extremely important to find a way to successfully include a vigorous tree canopy in the design. With shallow depth to bedrock, the site did not lend itself easily to the planting of new trees. The Silva Cell System from DeepRoot and the strong technical support provided by their excellent staff made it possible to grow healthy trees with abundant shade canopy in record time, in one of the most unlikely locations imaginable.”- Jackson Wandres, NV5

The site of the plaza, and most of Washington Heights, is built on the New York Palisades. This is a basalt bluffs formation 300 feet high, which forms the fjord through which the  Hudson River ebbs and flows. The rock is very high in the profile of the subsoil, so the shallowest 1X Silva Cell system was used.

Each Zelkova Serrata tree was given 375 ft3 of soil volume within the Silva Cells. The decision to use Silva Cells created a tree root environment below the plaza that is resistant to urban pressures. When tree roots thrive, so do the trees. When neighborhoods thrive, so do communities.

Shortly after reopening the space, NYC Councilmember Ydanis Rodriquez stated, “La Plaza de Las Americas will not only give our street vendors a beautiful, tree-lined venue to sell but also our neighborhood a new focal point.”