Located at the base of the Rocky Mountain foothills and home to the main campus of the University of Colorado, the City of Boulder is a vibrant town with a long history of smart growth, citizen driven investment in public spaces, and alternative transportation such as bike lanes and pedestrian-only thoroughfares.

In recent years a portion of the eastern part of the city near 30th Street and Pearl Parkway, historically an industrial sector, has become a popular site for the city’s blooming start-up companies. But with the large blocks and scarce roadway connections in that area, it was not very connected or pedestrian friendly. To make the area more livable, walkable, and community-oriented, an ambitious redevelopment plan for this area now known as Boulder Junction, was set forth that paired new multi-modal transportation infrastructure with innovative urban treatments (including urban forestry enhancements) to accompany the construction of a new high-density mixed-use development alongside one of the major thoroughfares of the city’s east side: Pearl Parkway. 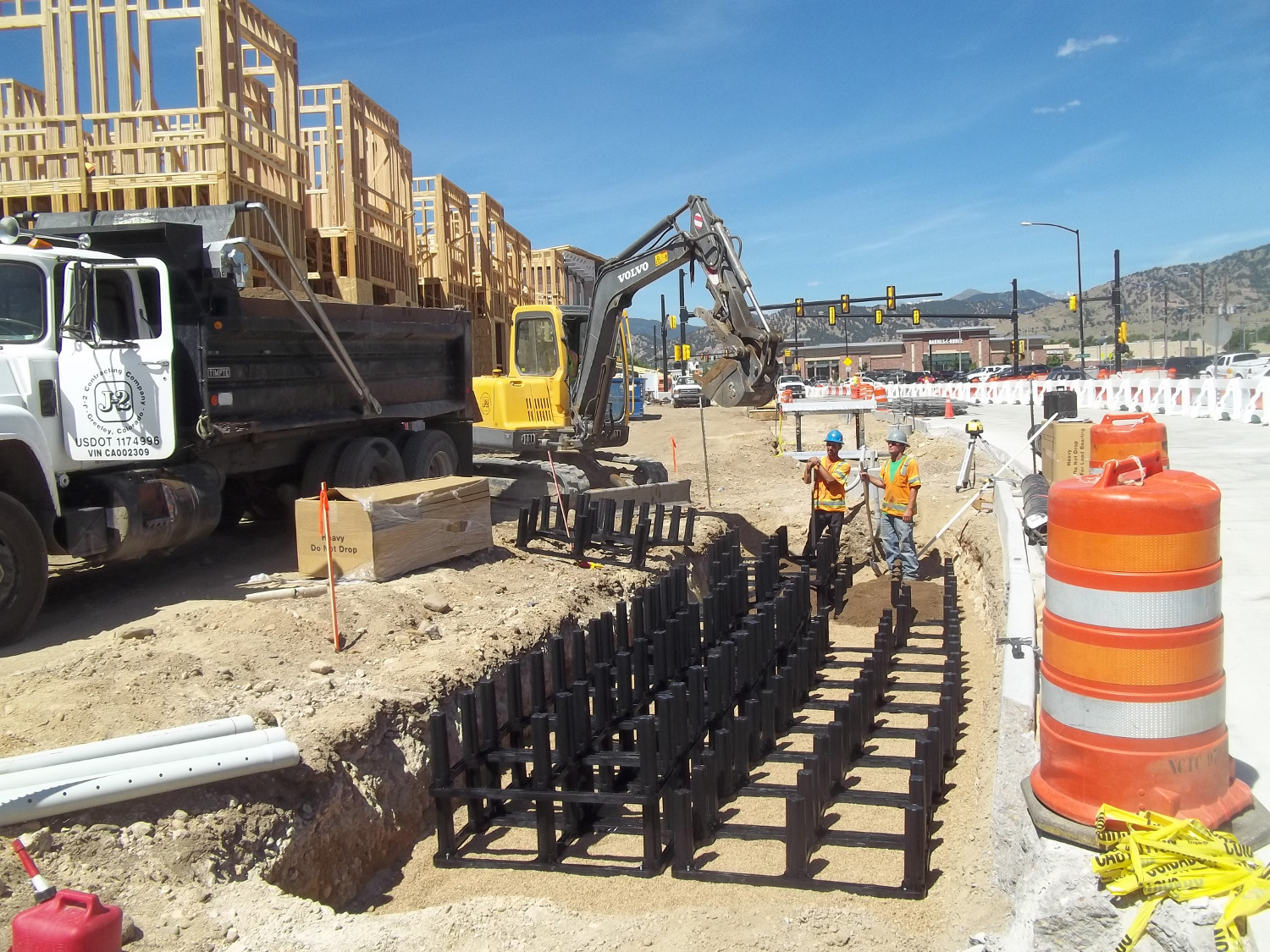 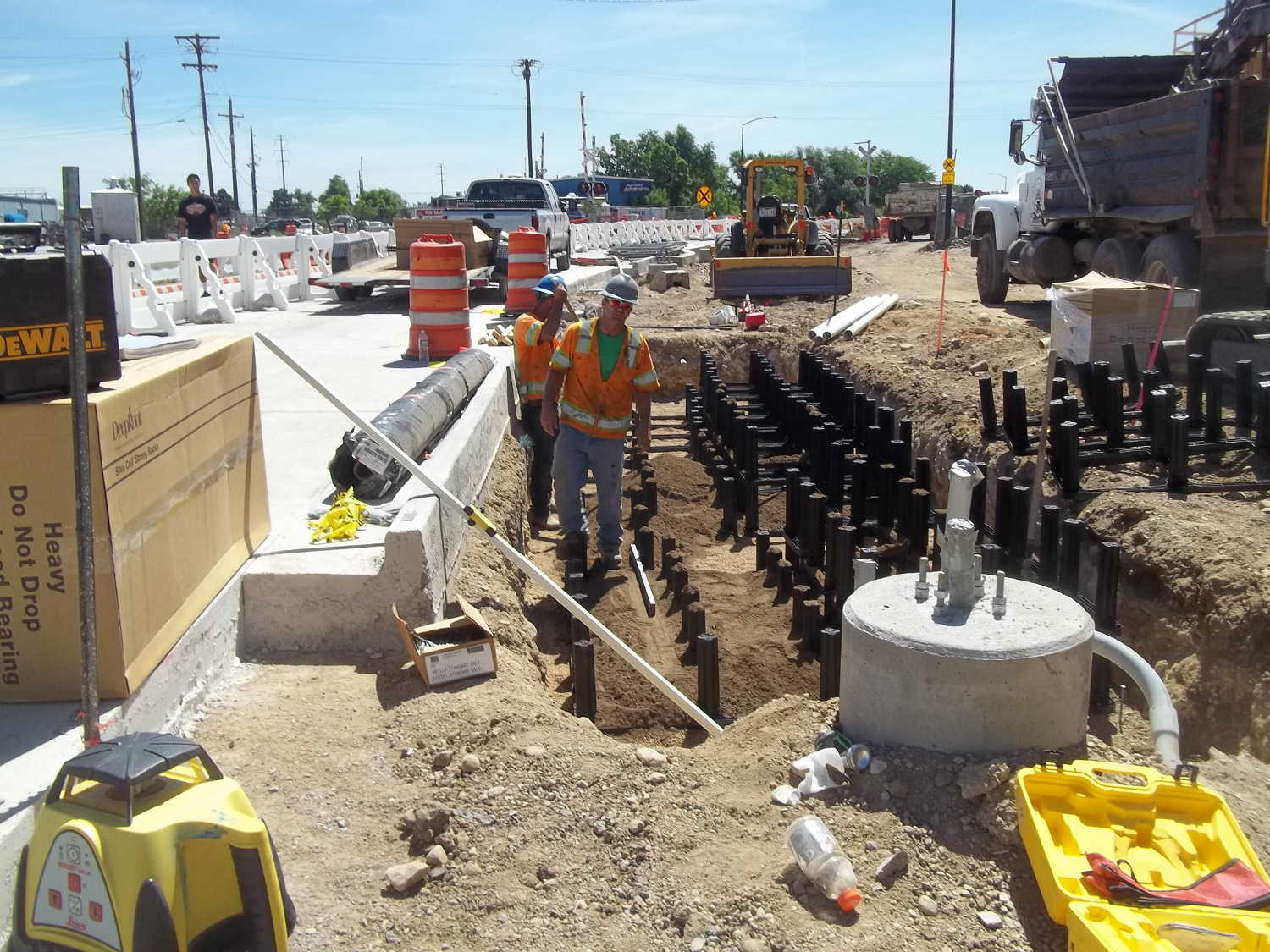 The Boulder Junction area east of 30th Street went through a land use area plan process, allowing for zoning changes to transform it into a transit-oriented development that would build density and mixed use while enhancing public spaces, walkability and access to alternative transportation. The City adopted an implementation plan to provide public funding for transportation improvements to support the area redevelopment. This project involved construction of a new multiway boulevard on the south and north sides of Pearl Parkway between 30th Street and the adjacent railroad and a new multi-use path along the north side of Pearl Parkway between the railroad and Foothills Parkway. A major goal was to transform the area from a causeway into a “place” that accommodates all modes of travel: pedestrian friendly, with slow speeds for cars and bikes that maximizes soft and permeable surfaces and planting areas in order to minimize heat island effect and mitigate storm water runoff. Because the city wanted the new high density residential units to have a ground floor presence, they needed to rethink the right-of-way and did so through synergistic design thinking that recognized the role the street section and trees play in the infrastructure of place-making.

Alex May, Transportation Project Manager for the City of Boulder Public Works Department, elaborated, saying: “We recognize the positive contributions of healthy urban forestry assets as a basic part of the transportation infrastructure- just like good drainage, durable pavements, or multi-modal transportation facilities. The focus on enhancing the public space with a healthy tree canopy contributes to the overall quality of the project and the urban environment.” 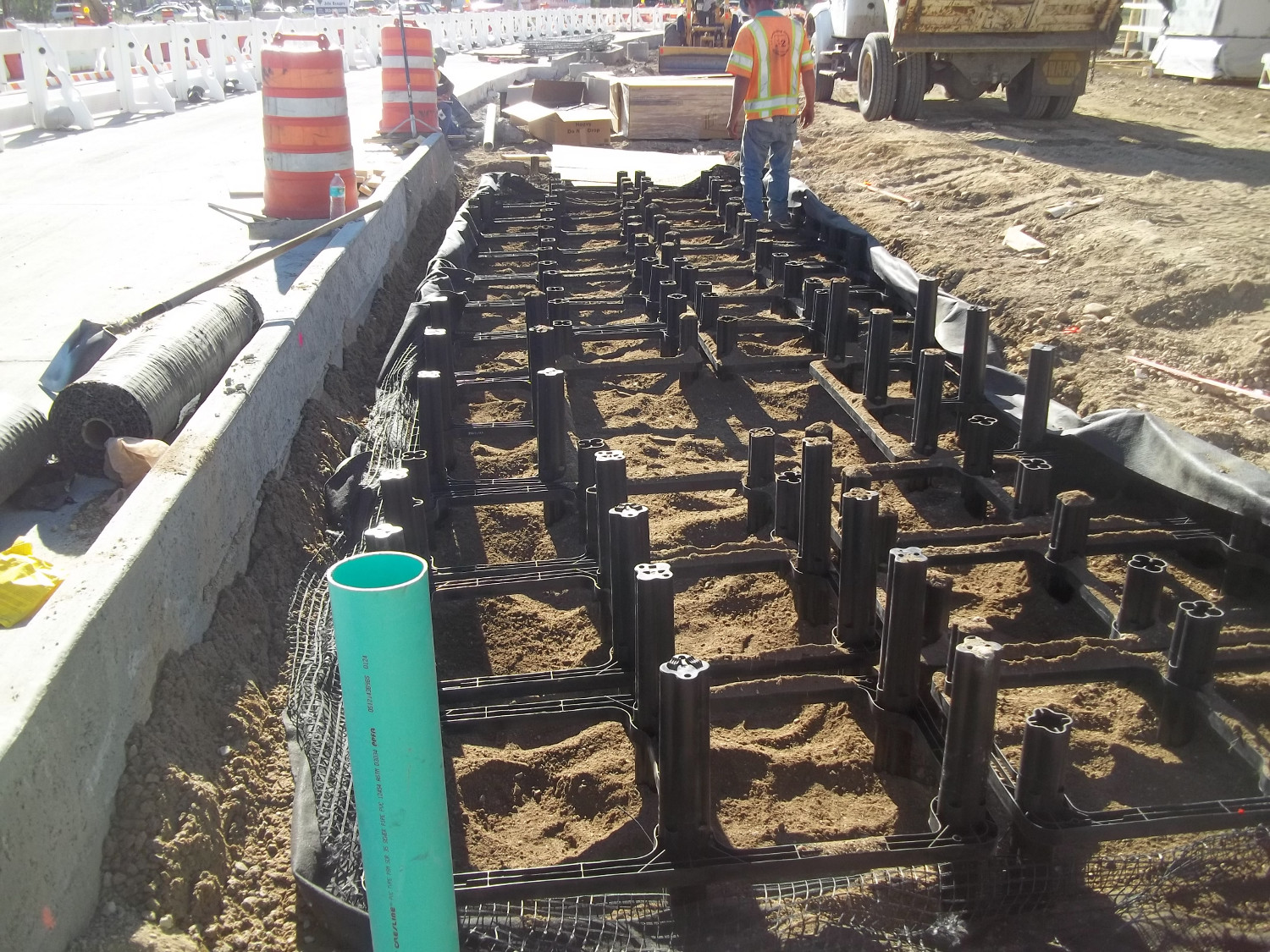 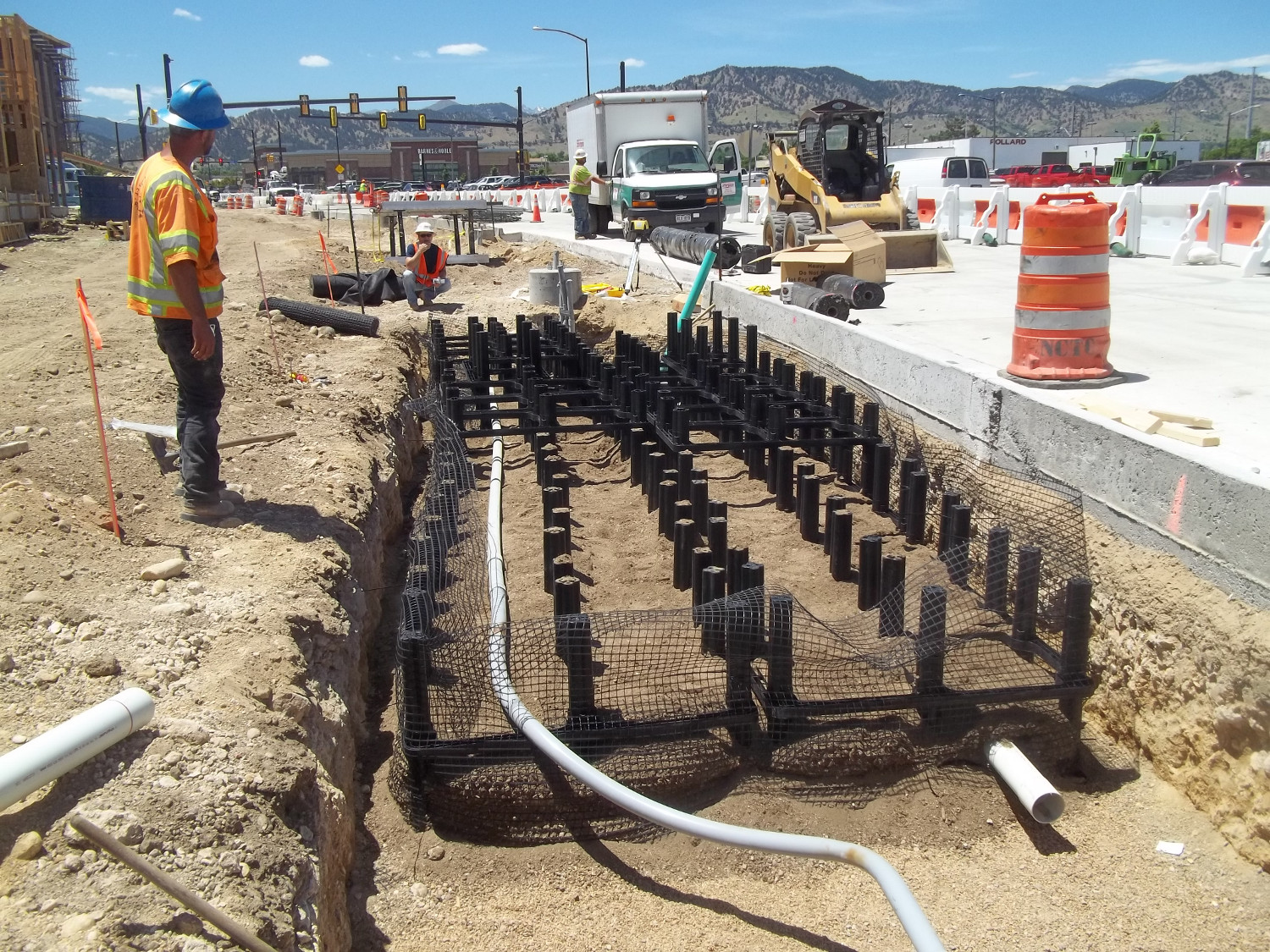 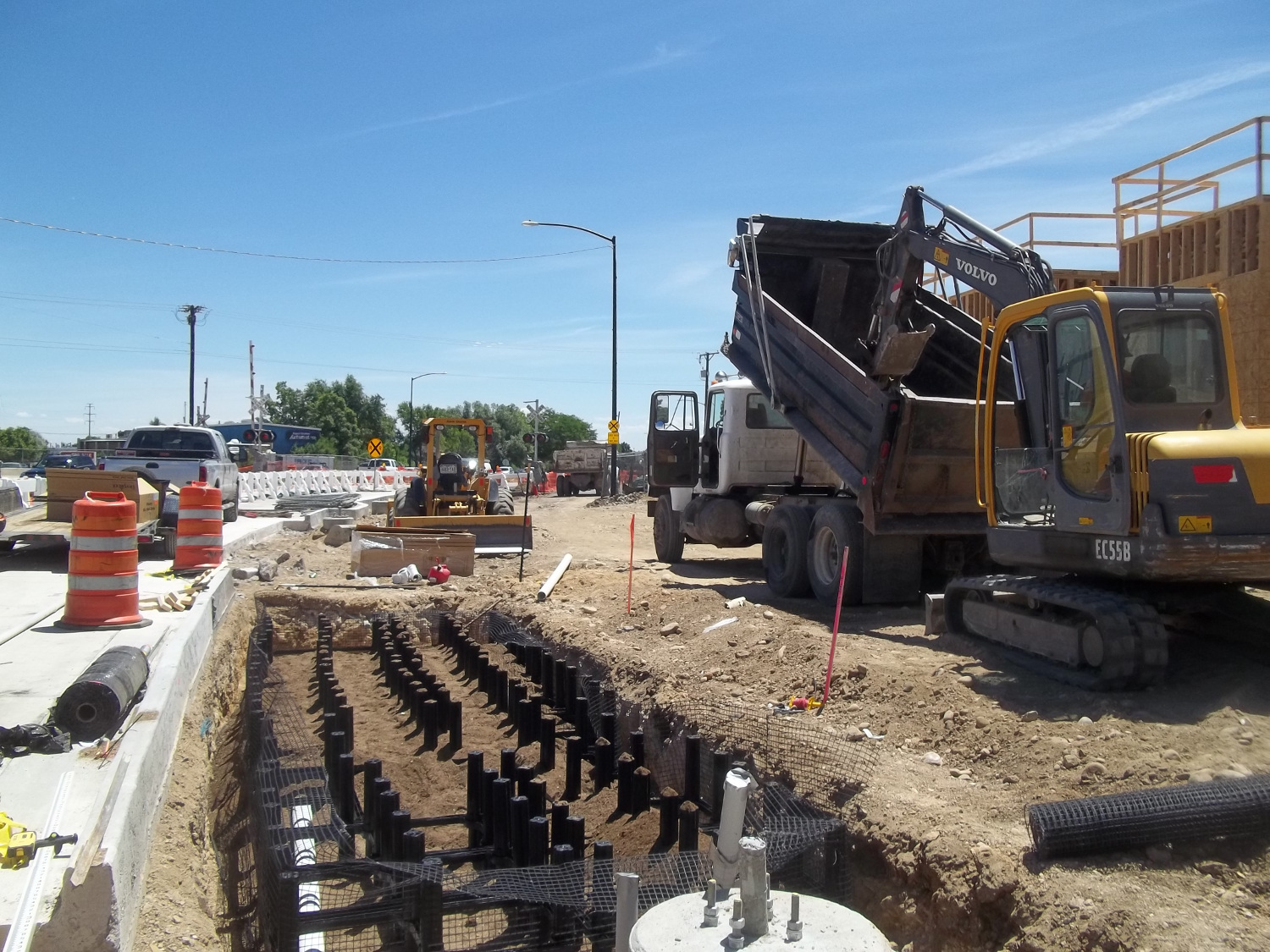 The space where they intended to plant the trees was significantly constrained because the site needed to accommodate multiple modes of travel and parking. The design team recognized the importance of integrating a healthy, sustainable, environment for the trees into the urban design, to complement the overall public space and infrastructure design, and selected Silva Cells to support the trees without impacting paved areas above ground. According to May, “the significant space limitations eliminated the ability to have open and wide planter areas, as the designers needed to utilize all available space for roadway, parking, bike and pedestrian facilities. The integration of Silva Cells under our multi-use path hardscape improvements allowed us to achieve transportation modal accommodation for pedestrians and bikes, while also providing the infrastructure underneath this hardscape for a healthy urban tree environment.”