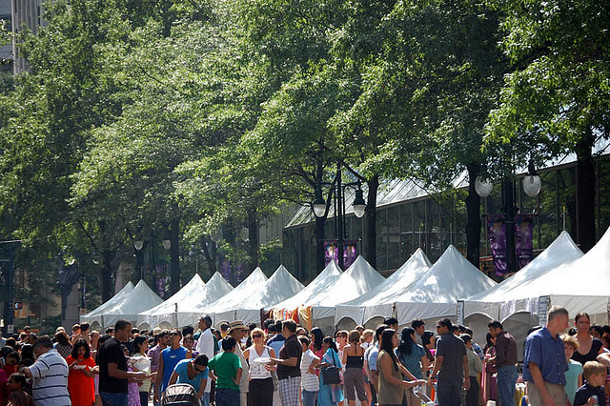 These trees were given enough soil to last a lifetime. Flickr credit: Willamor Media

When we talk about street trees and the urban forest, sometimes we miss an essential truth: Not all street trees are created equal. Mature trees are an order of magnitude more valuable to us than young, small ones.

Many people think trees can encourage criminal behavior by acting as cover for perpetrators. This isn’t true, but according to a 2001 study the belief is so entrenched that street tree placement has actually been discouraged in crime hotspots. In fact, several studies over the last 10 to 15 years have established that trees have a strong negative association with incidents of crime. Their research showed that buildings with high levels of vegetation had 52 percent fewer total crimes (both property and violent) than those with low levels.

More recently, a study of tree cover in Baltimore, published in Landscape and Urban Planning, shared similar results. Their conservative conclusion is that even a 10 percent increase in tree canopy was associated with a nearly 12 percent decrease in crime. This magnitude was 40 percent greater on public land. Some data indicates that smaller trees may not have a negative association with crime because, unlike taller trees, their canopies may obstruct people’s sight lines. To date, no studies have included tree height in their analyses.

A 2002 study by David Nowak, with the USDA Forest Service, examined how trees affect local and regional air quality by altering the atmosphere of urban environments. What he found was that large, healthy trees greater than 77 centimeters (30 inches) in diameter remove 70 times more air pollution annually than small, healthy trees less than eight centimeters (three inches) in diameter. See what this stark divide looks like in the chart below.

Storm water that runs off paved surfaces can quickly cause severe flooding, overwhelm sewer systems and pollute nearby waterways. To avoid this, “greener” and more ecological development tools aim to keep storm water where it falls. Trees, and the soil they grow in, are like natural sponges and pumps, providing quantity and rate control benefits through soil storage, interception and evapotranspiration. The bigger the tree, and the more soil it grows in, the more effectively it functions.

Interception is the amount of rainfall temporarily held on tree leaves and stem surfaces. This rain drips from leaf surfaces and flows down the stem surface to the ground or evaporates. The volume of rain intercepted by a tree depends on several factors. Because large trees have more leaves, they intercept significantly more rain than small trees, with interception increasing at a dramatically faster rate as trees age. See, for example, this model estimate of a hackberry tree in the Midwest:

Soil also stores rain water during and after a storm, making it available for plant growth. A typical tree growing in a lightly compacted loam soil can hold the runoff from a 2.54 centimeters (one inch) storm event from impervious surface area significantly greater than just the area under the tree canopy.

Evapotranspiration is the sum of water evaporated from soil and plant surfaces and the water lost as a result of transpiration, a process in which trees absorb water through their roots and transfer it up to the leaves, where it evaporates into the environment through leaf pore transpiration. Evapotranspiration continues to reduce water stored in the soil long after it stops raining.

Strategically placed trees can provide meaningful energy savings to nearby buildings by providing shade in hot weather (which reduces use of air conditioning) and acting as a wind barrier in cold weather (which reduces the need for heating). They also reflect more light and heat back up to the atmosphere than paved surfaces.

As with other benefits of trees, size matters. According to research by Greg McPherson done in Chicago, the growth rate of trees has a “direct influence on the rate of return on investment.” That’s because energy savings are related to the wall and window surface area that a tree shades — and larger trees produce more shade than smaller ones. According to McPherson, “shade from a single well-placed, mature street tree (25 foot crown diameter) would reduce annual air-conditioning use by 2 – 8 percent and peak cooling demand by 2 to 10 percent for cities across the U.S.” Taller trees also offer increased shading during the summer, when the sun is high, and increased solar access below the canopy in winter, when the sun in low. In sum, energy savings increase with tree age (i.e. tree size). 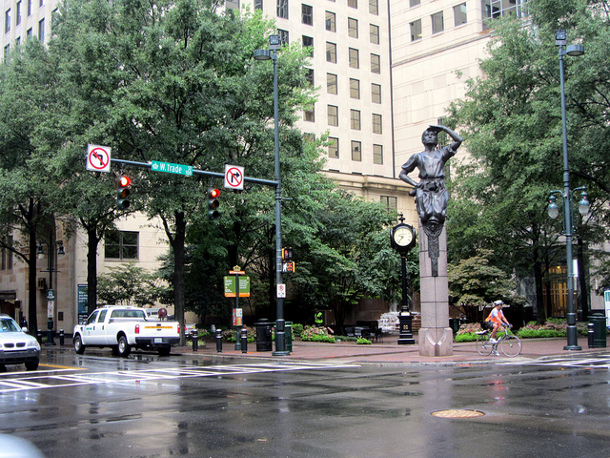 Just like forest trees that are homes to birds and other living things, city trees play a critical role in ecosystem diversity and wildlife habitat in the urban environment. Here again, mature street trees have significant advantages over young ones. A 2009 study published in Ecology & Society found that age of urban greenery directly affects its value to ecosystem diversity. Older Gardens and trees correlated with greater bird species diversity than young, new and intensively maintained ones.

Birds use patches of greenery to rest and refuel while migrating between winter sites and breeding sites. Migration is a critical period for birds, when they spend up to 90 percent of their time resting and refueling at stopover points on the way to their final destination. This makes these stopover points critical to the success of the whole trip.

Due to rapid urbanization, migratory birds are encountering increasingly fragmented habitatsthat, in many cases, are basically embedded in the urban fabric. But even a small area of urban forest can provide a tremendous benefit to the birds. Small patches, as little as a hectare, were observed being used for foraging.

I can’t think of another element of our urban infrastructure that does as much, in so many different ways, as a mature tree. Given this impressive (and still partial) list of benefits, what can be done to create and a healthy, thriving, long-living urban ecosystem? Plant the right tree in the right place, and give trees the soil they need to survive

These simple guidelines are totally achievable, but do require that we think differently about our urban forests. We must focus less on the number of trees we plant, and more on creating conditions in which trees can grow and thrive over the long term. Toronto, Ontario and Dublin, Ohio are two cities with ambitious policies working toward these goals.

Dublin, Ohio, meanwhile, approached the challenge with a Tree Preservation Ordinance, passed by City Council in 1998, that automatically designates all trees with a diameter at breast height of six inches or more as protected. These trees are subject to specific requirements pertaining to their removal and replacement, and developers are required to use special construction techniques to preserve their root systems and limbs.

The intent of the ordinance is to encourage responsible design that minimizes any impact on existing trees. For example, the city requires tree surveys and protection plans to be submitted prior to development, and the property owner must maintain protection devices throughout the entire construction period. If the devices fail to protect trees, they must be replaced. Inspections are performed throughout construction to ensure compliance.

The Tree Preservation Ordinance also contains an inch-for-inch replacement requirement that applies to healthy, protected trees that are removed or damaged during the construction process. The minimum size of a replacement tree is 2.5 inches.

“These trees are in addition to the other landscape code required trees,” said Brian Martin, Dublin’s zoning inspector. “So not only does the developer plant street trees, trees around the parking lot and trees within the parking lot to satisfy the landscape code, they may also need to provide replacement trees. That’s a lot of trees for a property owner to maintain along the life of the property.” 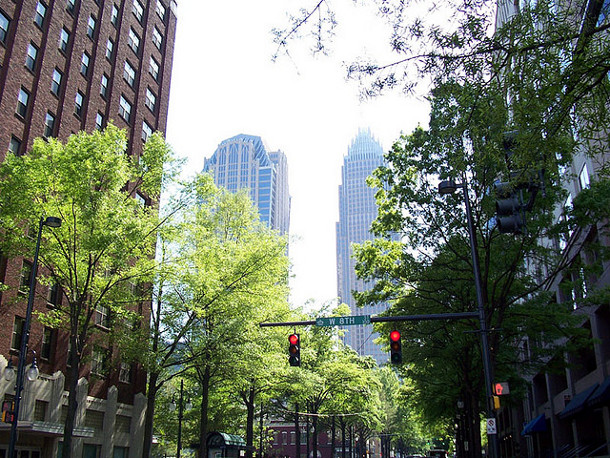 If the city determines that tree replacement would cause overcrowding, developers must pay them a fee, now at $100 per inch. Since 1998, the city has collected over $750,000 in tree replacement fees, money that its parks and forestry departments put toward maintaining and enhancing the urban forest.

To give the Tree Preservation Ordinance teeth, the city has personnel specifically designated for tree protection inspections. Martin’s own job was created in 1999 specifically to be out in the field and “ensure compliance throughout the construction process.” On the front end, he is involved with plan reviews. Once construction is done, he performs follow-up inspections every four years to make sure that trees on commercial properties are adequately maintained.

Dublin’s Tree Protection Ordinance is a high standard by any measure. It demands attention to trees at every step along the way, from developing a proposal that goes to the Planning and Zoning Commission and applying for a building permit all the way through construction and ongoing maintenance. It has enforced contingencies. Essentially, the City of Dublin has made it more expensive to replace trees than to preserve them — the opposite approach of many communities, but one that has served them while.

The ordinance was written and enacted prior to a huge development boom that took place over the following decade. According to Martin, a 2010 survey showed that 76 percent of Dublin residents selected tree preservation and conservation as their most important natural resource.

“Our residents have a voice at the public meetings when new developments are proposed,” he said. “They fight for the trees and the unique high quality of the City of Dublin. They provide an extra set of eyes for inspectors. They value the scenic views and vegetative buffers of our community. Our regulations and enforcement are unique to this area and you can really see the difference when you travel around central-Ohio and beyond.”

Planting a million trees is great. But planting even 500,000 in conditions that allow them to survive, thrive and mature is exponentially greater.