Today I’m happy to introduce a new, hopefully recurring blog feature: top 10 takeaways. The top 10 takeaway lists will be compiled by L. Peter MacDonagh, FASLA, on the key elements to know about based on events of note in the design, planning, and arboricultural communities. Expect the lists to be short, pithy, and helpful for people who weren’t able to attend or want a reminder of the key conclusions. Our inaugural list is from the Soil in the City conference hosted in Chicago from June 29 to July 2, 2014. -LM

Stickney, Illinois, a suburb of Chicago, has the largest waste water treatment plant (WWTP) in the world. The world! It is designed to clean 1.2 billion gallons of Chicago wastewater per day or 50,000 backyard swimming pools (20′ x 40′ x 4′ deep) filled with sewer water!

Chicago’s Metropolitan Waste Reclamation District (MWRD) produces vast amounts of biosolids per day, then composts and disposes of them. Biosolids (both Class A and Class B) are a tremendous source of organic matter in soil and would work great to amend damaged urban soils and could be re-installed in soil under pavement. Class A biosolids are pasteurized and safe to handle. Now that’s turning a waste product into an asset.

Deep tunnel Chicago holds the entire combined sewer overflow (CSOs) of both stormwater (SW) and wastewater (WW) when there are big rains in Chicago. This 27 billion gallons of water is stored in gigantic tunnels and old quarries. When Chicago’s Wastewater Treatment Plants (WTP) have available capacity, they clean up this mess to bring it to a drinking water standard. Unfortunately, this fantastic clean new source of water is then dumped into surrounding polluted lakes and rivers. In Arizona and California this water is used to irrigate golf courses and play fields. Recycled water deserves a better life rehydrating our city plants, trees and soils.

7) Which soil amendment is best?

Bryant Scharenbroch of Morton Arboretum found that when it came to adding amendments to soil, it was biosolids not biochar, that worked best. While the biochar amendment resulted in very good growth, the biosolids resulted in even better growth. Unlike with some composts, nutrient leaching was not a problem with biosolids. Biosolids are also much less costly than biochar. We have massive amounts of biosolids available in our cities that could be used to fix our broken urban soils – we need to give them a proper home.

Chicanes (a great word) are one-car long, curb-high peninsulas protruding into traffic that create protected street side parking. In Tucson, chicanes are retrofitted to manage storm runoff. With trees planted in these chicanes and water from storms or elsewhere running into them, these trees don’t close their stomata (plant air valves) down in the hot part of the day (11am to 7pm). That means these trees are evapotranspiring runoff and are cooling down the places where they are planted for the benefit of everybody in one of North Americas hottest cities. Even better, Tucson’s Department of Transportation is going to build more. It’s a good thing, because Tucson has an extremely low urban tree canopy (< 5%), and this hot city needs all the shading it can get. 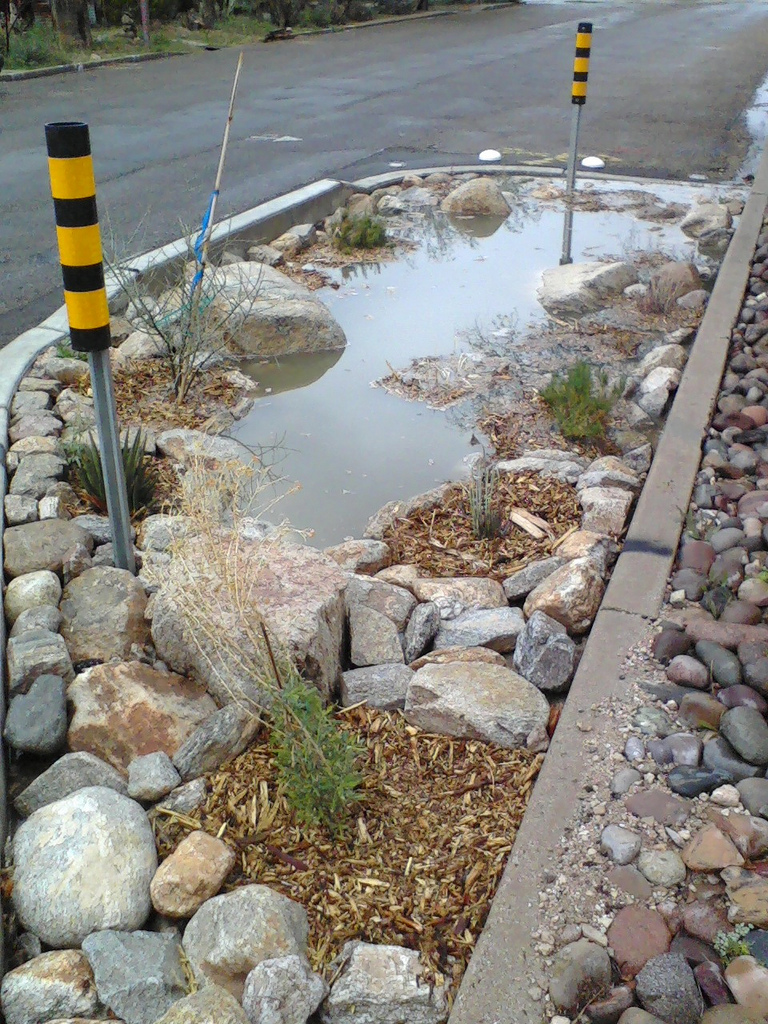 Greg McPherson with United States Forest Service found that trees irrigated with runoff with the chemical composition like that of “average” stormwater in Sacramento had a 33 percent increase in beneficial nematode populations – a dramatic and positive increase in soil health for urban trees. Get macropores in our soils and pour on the stormwater, folks.

Vacant lots have been offered up by many city planners and thinkers as a new source of inexpensive land in cities for farms, community gardens, parks, mini arboretums, or storm water infiltration. Many cities in the Northeast and Midwest have as much as 20 percent of their land standing vacant. On its face putting this land to other uses sounds like a great idea – make lemonade from lemons, right? But researchers from the Environmental Protection Agency (EPA) discussed the challenges of this simple idea because of the way demolition on vacant lots occurs. The practice is to demolish the home into the basement and bury the building remains with the surrounding topsoil into the hole. What these EPA scientists have found is that the inevitable result is that most of these lots have such terrible soil they can never fulfill their promise as places to infiltrate stormwater, farm, or grow vegetables.

3) All I want for Christmas is an urban soil survey

The Soil Conservation Service mapped almost all soil types in the US for agricultural purposes. While soil test pits were dug and investigated for every few acres of land, unfortunately cities were skipped completely. 80 percent of Americans live in cities, and while it is possible to go to remote mountains in Montana and discover exactly what soils lie beneath, city dwellers know nothing of the soils in their yards, gardens, parks or streetscapes. These soils are broadly designated as Urdothents, or human urban soils with no true soil horizons. A single reliable, scientific urban soil survey was completed for Baltimore in 1975. That’s too long ago! We need more urban soil surveys, lots more. For us to reliably infiltrate stormwater or grow large trees in our cities we will continue to fly blind until each city has its own soil survey. The EPA has formed soil survey teams to tackle this project, but because of funding shortages, each city will need to come up with the $50,000-$300,000 necessary to complete their survey maps. That’s a great deal. Consider being an advocate in your city to bring this idea to your city council. It’s hard to understate how incredibly valuable this would be as we face our urban forest, soil, and stormwater crisis.

Biochar was discussed a number of times as a potentially great soil amendment in our poor urban soils. The key is that the biochar must be activated after it is pyrolyzed (burned in a very low oxygen environment). Activation is primarily the process of hydrating and “aging” the biochar before it is used as a soil amendment. Biochar can be very effectively made from wood chips and other woody debris generated by big storms. In western North America, where pine forests are being decimated by mountain pine beetle and massive fires are a constant threat, much of the pinewood is largely useless for lumber – but it could live a useful second life as biochar, tying up lots of carbon dioxide in our urban soils.

The most important lesson for me was that we need to touch our urban soils, examine them and amend them with our ample compost and biosolids. Thus we can clean our urban water and air by growing the trees that will naturalize and sustain us right where most of us live.