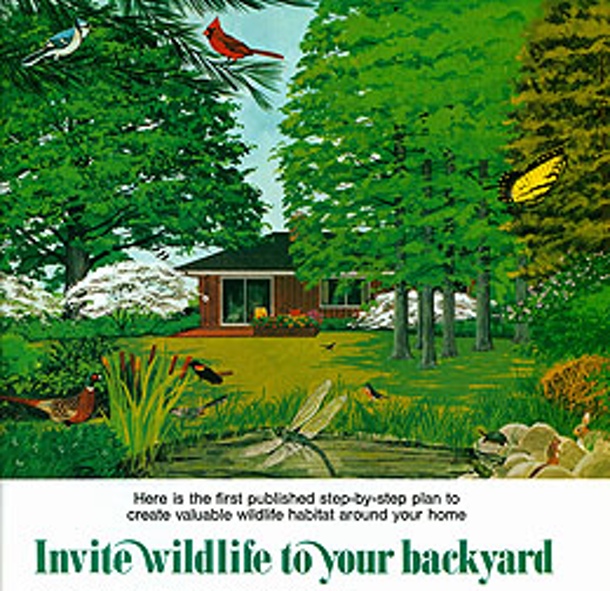 The cover of the original Jack Ward Thomas book, “Invite Wildlife to your Backyard” (apologies for the poor quality)

One of the reasons I find urban trees exciting is because of the wild creatures they attract. I don’t know as much about urban wildlife as I’d like to, though, so I was happy when I saw that the Urban Natural Resources Institute (UNRI) was hosting a webinar on this topic with Dr. Susannah Lerman, an expert in urban ecology with the USDA Forest Service Department of Environmental Conservation.

Dr. Lerman wants something simple: for people to see the way urban landscapes can support wildlife in addition to being beautiful and serving other important ecological functions. For example, tree canopies can serve as habitat for migrant species, deadwood acts as nesting spots for birds like the black-capped chickadee, shrubs can be early successional habitat for birds like cardinals, potted plants and flowers provide important food sources, and leaf litter nourishes insect populations that enhance soil and also serve as bird food.

Anyone who lives in a city knows that wildlife – often in the form of pigeons, rats, and so forth – can be quite plentiful (often too plentiful). But there isn’t much diversity, and the species often aren’t native. Using native tree and plants in our urban landscapes invites more native species by providing them with additional habitat. When yards mimic wildlands, Dr. Lerman said, they can have legitimate conservation value. Adding a mere 100 square meters (1,076 square feet) of trees to an urban area in the form of a pocket park, daylighted gardens, or simply planting trees on tree-less lawns or parkland, can benefit both wildlife and people. And the larger the park/treed area, the more species richness results.

So, what are some management strategies for conservation? There are a few exciting things that many people will be able to do.

One is that i-Tree, a tool used to assess ecosystem benefits, is adding a wildlife component to track the wildlife potential of trees. This “sustainability index” will link canopy cover percentage per hectare to habitat needs of different birds by species.

Another is by certifying your yard as a wildlife habitat through the National Wildlife Federation’s program. Over 150,000 yards have been certified – an impressive number, but it represents less than two percent of all the yards in the United States. The Smithsonian Neighborhood Nestwatch is a citizen-science program that serves as a complement to the wildlife certification program by tracking the year-to-year survival of backyard birds. Scientists partner with homeowners to access their backyards where they can tag birds each year and evaluate nest success. There is less nest predation in urban areas, suggesting that raising young in the city might be a safer option for birds than raising young in the wild (Ryder et al 2010).

Dr. Lerman’s latest area of study is how to make lawns – which do not provide any habitat and therefore have little ecological – less harmful for wildlife. She has found that ecosystem services increase when lawns are mowed less frequently, and is examining the direct effects that less mowing has on bees, arthropods/spiders, and soil respiration. She hopes to have more results next year.

Despite an overall increase in the number of programs devoted to urban wildlife diversity, bird species diversity continues to drop (Burchart et all, 2010, Science). This is the question that Dr. Lerman, and others like her, are trying to answer. Not wanting to be all doom and gloom, Dr. Lerman did point out that more than 60 percent of projected areas of urban development have yet to be built – that means that we have an opportunity to change how we construct our cities and parks to integrate wildlife habitat in a more meaningful and enduring way. It is the job of everyone who deals with development – designers, contractors, and of course homeowners themselves – to make a difference. Let’s hope we are up to the task.