*The MBCC is open for conferences, after a year of closure due to COVID-19. The convention center hosts COVID-19 testing outside of its building.

Since opening in 1958, the Miami Beach Convention Center (MBCC) has hosted events ranging from iconic sports matchups and political conventions to renowned art shows. Muhammad Ali’s first heavyweight championship bout against Sonny Liston was held in Hall C in 1964. The first Miami International Auto Show was in 1971, and both the Republican and Democratic National Conventions took place at the MBCC in 1972. In 2002, it was the site of the first ever Art Basel in the United States. Sandwiched between these entertaining and enthralling events were two renovations: the first in1974 at $15 million and the second in 1988 for $54 million. 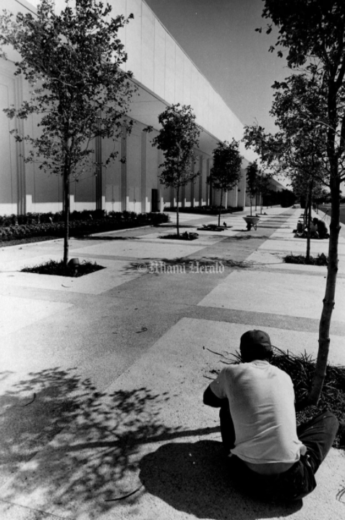 In 2015, the MBCC announced a project that would be a nearly 12-fold cost increase from the ’88 renovation, a $620 million revamp that would spawn a list of holistic environmental building achievements, certificates, and accolades. On the list of environmental and green infrastructure design elements is the resilient, green infrastructure product Silva Cell. The 1.4-million-square-foot, 5 block faces Convention Center is now DeepRoot’s largest project in southeast Florida and just a block away from the famous Lincoln Road, in Miami Beach’s city center. 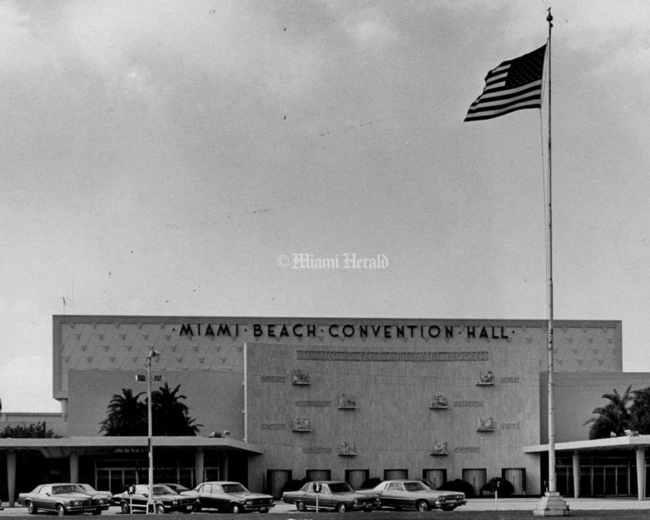 When any of the 600,000 yearly guests visit the Convention Center, before they enter the building, they are walking on 1453 1x and 2x Silva Cells. At first glance the front of the Convention Center is a captivating sight, with a two-block long, horizontally cascading sidewalk full of palms, framing the wide pedestrian-friendly sidewalks. Unbeknownst to them, hidden below ground are Silva Cells, which are simultaneously increasing soil volume by suspending the pavement, alleviating compacted soils, and providing a buffer against king tides and sea-level rise.
The building, now enlarged to 1.4 million square feet, made the following sustainable and green infrastructure commitments with the 2015 renovations:
– It is LEED Silver-certified.
– 95% of construction waste was diverted, equating to 38,000 tons of material getting recycled.
– 20% of the materials used in the renovation were sourced locally within Miami.
– Landscaping projects preserved more than 200 trees on-site and will add 300 trees in the near future.
– Solar panels will be installed above the parking areas completed with EV charging stations.
– 9 acres of public green space surround the site with Silva Cells for trees in the paved areas.
– Compostable service items for all meetings, and food waste will be donated to local community.
– It was a Convention South Magazine 2018 New or Renovated Meeting Site winner. 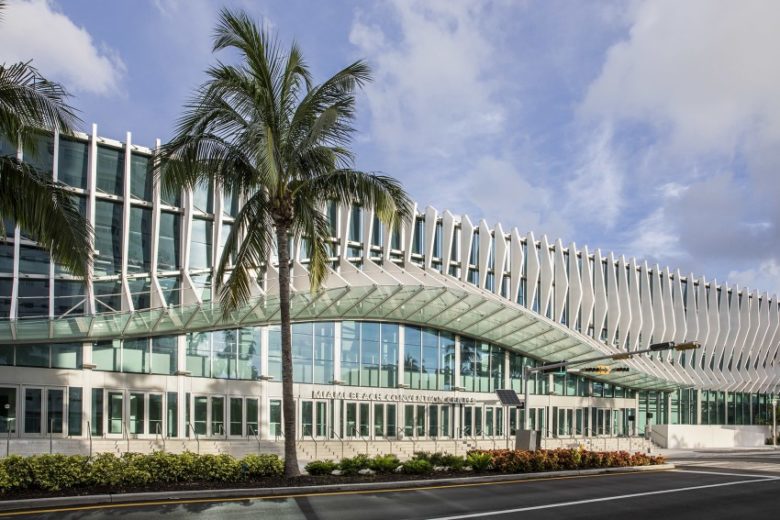 Designer West 8 and the city were aligned in the goals and efforts of the latest renovation. In late 2018, shortly after MBCC’s reopening, Miami Beach’s Mayor, Dan Gelber, referring to the effects of design on our future, stated, “We really have to be a city of the future. We can’t just sit around and think about how things used to be; we’ve got to think about how they need to be.”
Both the City of Miami Beach and Metro Dade County strongly supported the environmental efforts of the design team to address the issue of sea-level rise in Miami. According to The Wall Street Journal, in 2014 the city embarked on a plan to counteract the more frequent and intense rainfall events by installing bigger storm-water pipes and new pump stations to push rainwater out to sea. It also began elevating sea walls and raising roads by at least 3 feet in the lowest-lying areas to address sea-level rise. Blocks from the Convention Center, the Sunset Harbour neighborhood, which overlooks Biscayne Bay and often flooded during the highest tides, was the first commercial and condo area where these measures were implemented. Silva Cells were used throughout that neighborhood, and other elevated areas around the city, including the Convention Center.

The city and the county worked closely with West 8, the general contractor, Clark Construction, and other team members to see the remarkable design through to successful completion.
As West’s 8 founder and designer Adriaan Geuze and Ashley Schwemmer PLA stated:
“West 8 takes special care to ensure trees receive high-quality soil and ample soil volume. Soil is the foundation of any landscape. By investing in it, you are investing in the comfort of the park’s visitors. By providing trees with additional soil volume, they will grow larger and live longer, which also protects the client’s initial investment by reducing the frequency that trees are replaced. This is critical, as trees provide the shade and comfortable microclimate for harsh streetscapes, an especially important factor in Miami. Additionally, more soil volume provides storage and absorption of water from flash flooding events. The use of Silva Cells allows excess water to be stored under the concrete sidewalk, creating a more sustainable approach for urban drainage and reducing reliance on off-site resources. Our experience with Silva Cells across our projects is that they have proved to give long-lasting environmental benefits, which is a goal of the LEED Silver Facility.” 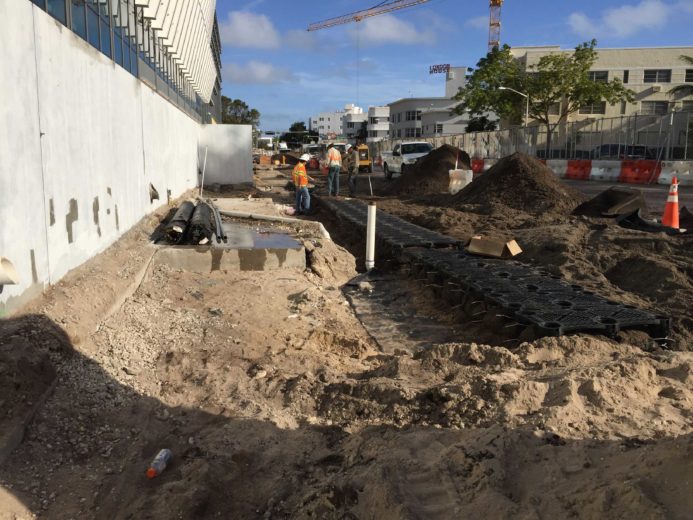 “The installation went very smoothly, and the cells performed well in their constructability. The system is easy to work with and is designed so you can you put it together in a method of layering soil and fill interchangeably. They were easy enough for the various trades to coordinate amongst themselves, so that was a bonus. It went quick.”
– Larry Cantor, Project Manager, Superior Landscaping 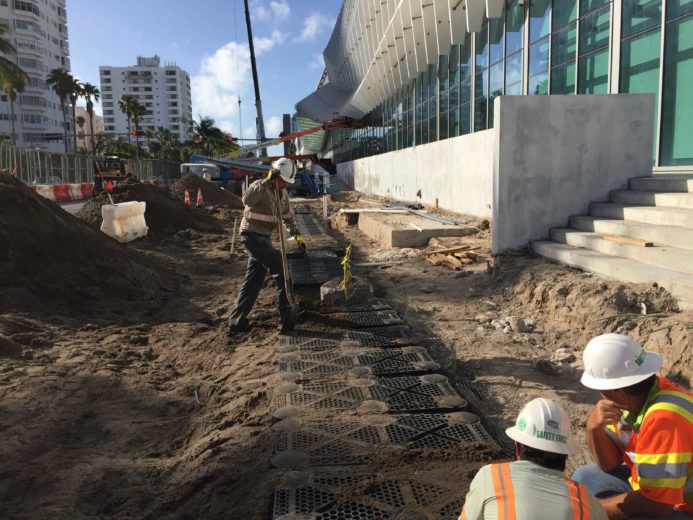 Such synergy is not easily achieved, however. Commitment from the contractor and weighing all factors, including cost and productivity, are balanced in seeing the vision changed into reality.

“Working in downtown Miami Beach was complicated due to many known and unknown underground utilities and the water table, which changed throughout the day, every day. Working with Silva Cells was so easy due to their flexibility, if we encountered something, we could switch the depth of the Silva Cell and continue to work. We were very successful as a team in coordinating to make sure the installation met the designers’ intent without affecting or damaging any underground systems.” — Hernan Guerra, former senior project manager, Clark Construction Group — Miami Beach Convention Center

The Design And Lasting Legacy

A mixture of Silva Cell depths and layouts were used along the perimeter roads of the Convention Center, as well as the adjacent park, also designed by West 8. The architecturally dramatic entrance along the four-lane divided highway that is Convention Center Drive needed similarly dramatic plantings to match the street trees across the drive by the Miami Beach Botanical Garden and the newly planted street trees that created a pedestrian friendly way for conventioneers to get to the open space in Convention Center Park. In all, 719 Silva Cell 2x systems were used along both sides of Convention Center Drive, supporting 47 multistem Solitaire Palms and 9 Live Oaks. Along the eastern side of the Convention Center, on Washington Avenue, 554 2x systems and 180 1x systems provide soil for a mixture of relocated Solitaire palms and Gumbo Limbo in large planting beds and tree openings. This side of the Convention Center will have fewer vehicles and needs well shaded walkways. Most conventioneers will enter via bus through the grand entrance on Convention Center Drive and exit via the more pedestrian-friendly Washington Avenue side on their way to the Lincoln Road Mall and other Silva Cell installations such as at the Frank Gehry–designed New World Symphony, Espanola Way, and along Pennsylvania and Lenox Avenues. Additionally, the mature trees will also soften the view of the edifice for the adjacent neighborhood residents.
In the decades since the Convention Center’s initial construction, through multiple renovations, the need for tree replacement has inevitably occurred over the years. This time, the trees, the soil, and the installation will be better equipped to handle extreme weather, manage stormwater, and encourage tree longevity.
Images below courtesy of Fentress Architects 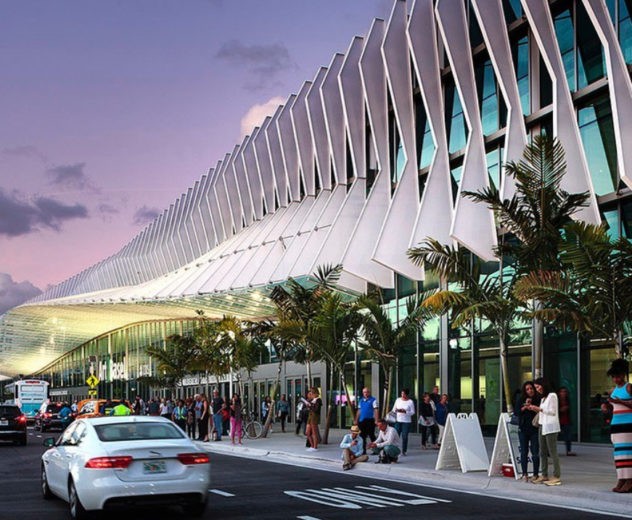 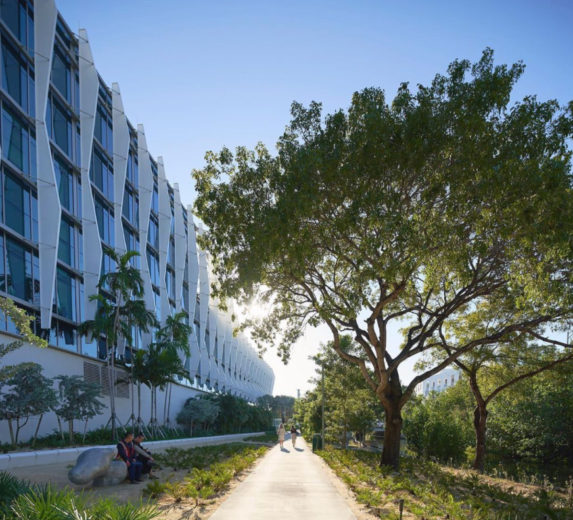 North side of the site, no Silva Cells are below the surface of the trees in this photo.