Is There a Silver Lining to Shrinking Detroit? 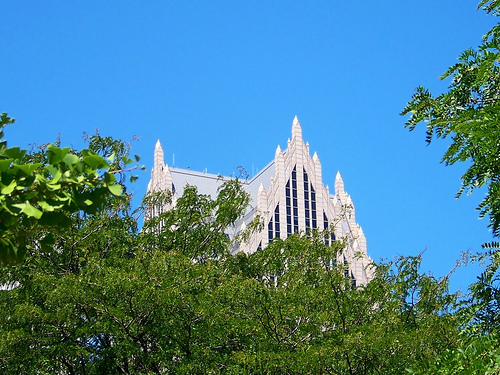 Something interesting and unorthodox is happening in Detroit. You may have read about it a year or two ago when it first got started: Mayor Dave Bing has started an open-ended discussion about how to shrink Detroit so that its population is more densely arranged around the infrastructure it can afford to maintain.

In very simplified terms, Detroit’s problem is that its population has shrunk so dramatically from its peak that citizens are scattered over a huge area. Entire swaths of this former boomtown are basically uninhabited. The city cannot afford to provide services to these small, isolated communities over such a great distance. As Mayor Bing put it, “The key to our coming back is being focused and making sure that we’ve got the right kind of density in the right parts of the city.” While nothing has been decided, one early proposal called for razing buildings and houses in order to transform up to a quarter of the 139-square-mile city in to semi-rural farmland.

Shrinking a city is obviously a complicated undertaking. I’m not trying to be disrespectful of Detroit’s population when I say that I find the idea of letting parts of the city go back to being land very appealing. Deliberately consolidating and constraining the footprint of a population strikes me as very un-American, and I mean that in a good way. Our ethos is entirely about growth and consumption; trees and other living things can adapt or get out of the way. Generally speaking, shrinking is not something to which American cities aspire. Yet in cases like Detroit, where the city’s infrastructure is grossly outsized compared to the population, no change at all is not a viable long-term solution.

I realize that cities, worldwide, are expanding rather than contracting. And I want to be clear that I’m not fetishizing decay or hard times. Detroit is grappling with very real and serious issues; no doubt there are many highly experienced and educated people who are weighing in on what to do. Still, it would be nice to see more cities choosing to leave land that is undeveloped or abandoned available for public use and to bypass development in favor of preservation. That would truly be green infrastructure for your community.