Trees and Soils: Stormwater Superstars in the Greater D.C. Region? 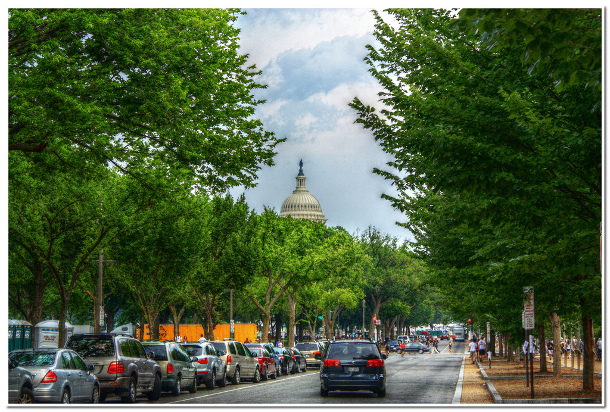 Washington D.C. street with the Capitol in the background. Flickr credit: Hari_Menon

Stormwater permits are maturing in the greater D.C. region, driven by Chesapeake Bay and Anacostia River restoration mandates.   Two of the three major Anacostia stormwater permits – for Montgomery County (issued in 2010) and the District of Columbia (issued in 2011), carry real clout in the form of retrofitting mandates with required numbers of impervious surface area to be retrofitted.  The Prince George’s County stormwater permit renewal is awaiting action from the Maryland Department of the Environment.  Prince George’s environmental officials Adam Ortiz and Larry Coffman have publicly supported an aggressive green infrastructure mandate for this permit, along with nine other strengthening measures requested by the Anacostia advocacy community.  The total investment in retrofits to be built by these three jurisdictions will be well over a billion dollars over roughly the next five years.

The DC stormwater permit requires the District to achieve a minimum net annual tree planting rate of 4150 tree plantings.  The Montgomery County permit doesn’t have specific tree provisions, but it does require the County to “restore” (apply retrofits to serve runoff from) a minimum of 20% of older (uncontrolled) impervious surfaces countywide, amounting to 4300 impervious acres.  The Prince George’s permit is expected to have the same 20% provision as for Montgomery County, but to cover up to 8000 impervious acres, since Prince George’s has significantly more urbanized land.

Trees are poised to move from bit-part players into leading roles in these stormwater retrofit programs.  How soon trees move into the limelight in these programs, depends in large part on the level of integration that local officials can achieve in breaking down bureaucratic and technical barriers.  Another major factor in the “tree-stormwater” equation is revising local and state regulations and codes to promote, and remove barriers to, the use of trees in stormwater retrofit designs.  These stormwater permits also mandate code changes to promote green infrastructure practices.

Some skeptics have cast doubt on the possibility for a large role for trees in these programs. Some can’t wrap their minds around combining stormwater with trees – they envision trees sitting in ponds of water and believe they’ll be goners.  For these skeptics, reviewing the DeepRoot web site and the work of Dr. Peter McDonagh and others, can replace that image of “drowned trees” with pictures of large, healthy trees with ample soil units designed to soak up runoff like thirsty sponges.

Integration of local tree planting and forest canopy conservation programs with stormwater programs is another route to stormwater success.  Bob Hoyt, Director of Montgomery County’s Department of Environmental Protection (DEP), is looking for just this kind of integration in the wake of the County Council’s enactment in July 2013 of a pair of urban tree bills – one for street trees and one for trees on private lots.  The latter bill requires a minimum number of trees to be replanted based on the size of the disturbance, for most activities that require a sediment control permit. This will include most new homes and tear-downs, even on very small lots. If possible, the replanting ratio for trees removed by builders, with a priority placed on replanting will be on-site or in the same watershed.  Builders can also pay a fee in lieu of replanting themselves. This new law can potentially support stormwater-tree practices such as Silva Cells designed to take in road runoff for high-visibility urban tree plantings.

Yet another initiative that Montgomery County is reviewing is establishing a Tree-Stormwater Practice Specification.  This proposed Tree-Stormwater Spec originated through a collaboration between area builders and Conservation Montgomery, an environmental umbrella group, in the Spring of 2011.  Some builders say they want to keep the mature trees on their lots, but end up cutting them down in order to comply with mandates to install underground tanks and other less-green options.  The Tree-Stormwater Spec is now undergoing further review and revision thanks to input provided by Maisie Hughes of Casey Trees; Chris Earley of Greening Urban; and tree expert Laura Miller of Montgomery DEP.

One of the remaining questions is how to quantify the stormwater volume that is captured by a given tree and its associated soil volume.  Though the proposed Spec attempts to answer this question through knowledge of basic soil types combined with the Critical Root Zone to define the soil volume, for urban trees some reviewers have questioned the reliability of this “textbook” method, and have requested further scientific research to demonstrate that even urban trees surrounded by compacted “fill” soils will be able to capture the predicted volumes of runoff.

The i-Tree methodology is sound, but it tends to seriously lowball the stormwater capture estimates.  i-Tree quantifies stormwater reductions based on canopy interception, which is important but only amounts to about 10 to 15% of a tree’s potential stormwater capture.  The soil volume associated with a tree is by far its largest stormwater capture component, mediating both infiltration and evapotranspiration.

To the extent that further research is needed, let’s identify the right questions and the best researchers to solve them, and get started now to build all the legal and technical infrastructure that we need at the local, regional and state level to enable the best, most effective stormwater practices – including tree-based practices – to be built.

Diane Cameron is Conservation Program Director for the Audubon Naturalist Society, and a consultant to the Natural Resources Defense Council.